Part 4 of our series on Important Moments in Team Building.  See introduction, and up-to-date list.

When American League president Ban Johnson orchestrated the creation of an AL franchise in New York in 1903, it was with the hope that it would become one of the flagship teams in the league. This did not happen right away, as the team mostly struggled both on the field (no pennants for its first dozen years) and off (a pair of unsavory owners). The tipping point in the story, arguably the most important event in Yankee history, was the purchase of the club in 1915 by Jacob Ruppert and Tillinghast Huston. Within a few short years, the AL had its strong team, one that would compete both in New York (where the Giants had long dominated the city’s interest) and in all of baseball. Ruppert, whose family owned one of the country’s biggest breweries, was one of the first truly rich men active in the game, and dedicated the remainder of his life to the greatness of his team.

In 1915, a willingness to spend money to build a great team could only take you so far. Teams primarily acquired fully-seasoned players from the minor leagues and hoped that a couple would turn into stars. For the first few years of Ruppert’s tenure he relied on his field managers to advise on potential deals (there were no general managers yet), and the Yankees were active whenever talent became available. When they purchased the team during the Federal League war, the AL promised the new Yankee owners that some major leaguers would be made available from existing teams. The other AL owners proved not quite as openhanded, and the Yankees could only purchase Wally Pipp from the Tigers and Bob Shawkey from the Athletics. They landed a few others from the Federal League when that league disbanded. Ruppert’s first big purchase came a year later: Frank Baker from the Athletics for $37,500 when Connie Mack was completing the selloff of his stars. The talent had improved, but players like Baker were not available very often.

Fortunately for the Yankees, Ruppert soon had another willing seller. The Boston Red Sox won four pennants in the 1910s, but their owner Harry Frazee was feeling a financial squeeze from his purchase of the team and Fenway Park, and a variety of theatrical interests. With several financial issues coming to head in 1919 and 1920, Frazee found himself severely cash-strapped. Frazee was a New Yorker and a social friend of Til Huston, and Ruppert had plenty of money. Frazee’s most sellable assets were his ballplayers.

By 1919 Red Sox star Babe Ruth was one of the best pitchers in the game and also one of the best hitters. After winning 65 games with a 2.02 ERA in his first three seasons, Ruth gradually transitioned to the outfield in 1918 (winning 13 games while leading the league in homers) and 1919 (winning 9 games and setting an all-time record of 29 homers). Along with Washington pitcher Walter Johnson, Ruth was one of the two best players in baseball.

Frazee was not done, not by a long shot. Over approximately six years, Ruppert sent about $450,000 to the Frazee (plus the loan), and received an extraordinary haul of players. Besides Ruth, the Yankees also acquired Joe Dugan, Everett Scott, Carl Mays, Joe Bush, Waite Hoyt, Sam Jones, Wally Schang, and Herb Pennock, among others. When the Yankees won their first World Series in 1923, former Red Sox made up four-fifths of their starting rotation and four of their starting eight position players.

For more on the Harry Frazee’s sales, read this article.

It was probably inevitable that the Yankees would become the game’s greatest team. Jacob Ruppert was a rich owner devoted to spending his money to build a winner, and unlike many other owners he did not take cash distributions from his team, but reinvested in his ballclub. Just as important, he was a brilliant judge and manager of men. He built an extraordinary front office that became the model of all front offices to come. He hired Ed Barrow as general manager and two great managers (Miller Huggins, and then Joe McCarthy), all of whom he supported completely. He built the game’s greatest ballpark – Yankee Stadium – and soon drew the biggest crowds. But the suddenness of the rise was due mainly to the largesse of the Red Sox and Harry Frazee. The Red Sox had been the dominant team in the league for its first two decades, and Frazee essentially transferred all of the club’s talent to New York.

After two World Series losses, the Yankees championship in 1923 marked them as the marquee team in baseball. In the ensuing century they have usually been very well capitalized and very well run, and have largely retained their status as the best franchise in the game. For most successful teams in the past century, keeping up with or overtaking the Yankees has often been one of their most challenging obstacles. 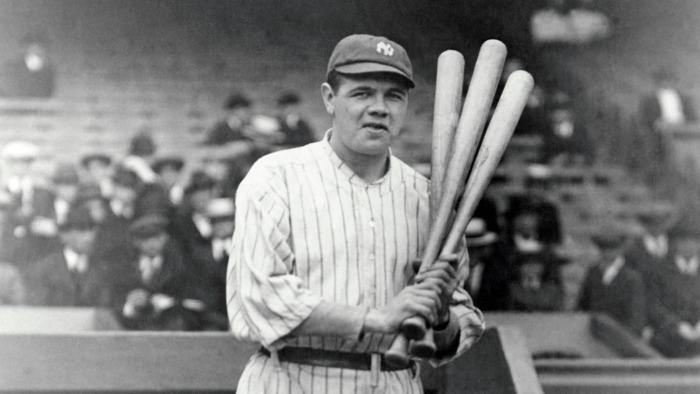