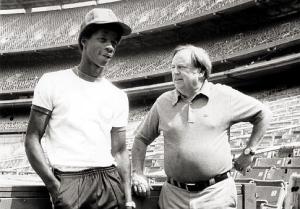 Frank Cashen had two stints running a big league baseball operation.  In his first job he oversaw a budding great team as president and later kept it contending in the GM role as well. At his second stop he took over a long struggling franchise that needed a complete transformation.  He succeeded at these two opposite challenges masterfully, meriting his status as one baseball’s best baseball ops executives.

Cashen spent 17 years as a sportswriter in Baltimore, earning a law degree at night.  In the late 1950s he went to work for Jerry Hoffberger, first running a couple of race tracks and later working as the advertising chief for Hoffberger’s brewery.  When Hoffberger, a longtime minority owner of the Orioles, assumed control of the team in 1965, he asked Cashen, a brilliant and trusted executive who nonetheless had no experience in the business of baseball, to oversee it.  Not long after, general manager Lee MacPhail left to work in the commissioner’s office, and Cashen promoted Harry Dalton to be the Orioles GM.  Cashen was Dalton’s boss, but he needed the talented Dalton to run baseball operations.  The team won four pennants and two World Series during the six years (1966-71) of this arrangement.

After the 1971 season, fresh off three straight pennants, Dalton left to run the lowly California Angels, saying he wanted a new challenge.  Rather than hiring a replacement, Cashen took over the GM duties himself.  This was not a big surprise — Cashen had been intimately involved in the day-to-day work that Dalton had been doing.

Although the Orioles were on a great run, the team was aging and would change rapidly over the next few years.  Just a few weeks after taking over, Cashen traded star and leader Frank Robinson to the Dodgers, a move that Dalton recommended before he left.  The team was stunned, and many blamed Robinson’s departure for their team-wide, year-long batting slump, dropping from a league-leading 4.70 runs per game to just 3.37, and a third place finish.

But Cashen got them back over 90 wins the next three years, making key deals that landed Tommy Davis, Ross Grimsley, Lee May, Ken Singleton, and Mike Torrez.  Together with youngsters Bobby Grich, Don Baylor, and Al Bumbry, and a few key holdovers (especially Jim Palmer) the team won division titles in 1973 and 1974, and took the Red Sox down to the wire before losing in 1975.

After the season Cashen resigned and went back to work in Hoffberger’s brewery. Cashen left the organization in great shape, and they remained the gold standard for excellence throughout the system.  Soon players like Doug DeCinces, Eddie Murray and Mike Flanagan would be joining the big club, keeping their great run going another decade.

Cashen spent a couple of years out of the game before working in the commissioner’s office for two years.  In early 1980 Nelson Doubleday, the new owner of the New York Mets, talked Cashen back into baseball, giving him complete control of the club (acting as both GM and the COO).  The Mets had been a woeful team for four years, and in 1979 played before fewer than 800,000 fans (still the low water mark for the team).  Cashen told ownership that he needed at least four years to turn the organization around, and he began by revamping the scouting and minor league systems.  Over the next several years the Mets developed Daryl Strawberry, Dwight Gooden, Kevin Mitchell, Lenny Dykstra, Mookie Wilson, Rick Aguilera and several others.

Meanwhile, Cashen made some early high-profile attempts to improve the big league team.  He acquired sluggers Dave Kingman and Ellis Valentine in 1981, but neither helped much.  Cashen dealt for George Foster in 1982, but the slugger’s days of stardom proved to be over.  Cashen first hit the jackpot in June 1983 when he traded Neil Allen for Keith Hernandez.  Coupled with the debut of Strawberry a month earlier the Mets had arguably the two best position players they had ever had.

Cashen’s biggest decision for 1984 was the hiring of new manager — Davey Johnson, who Cashen knew from his Oriole days.  Johnson had managed in the system, and like Cashen wanted to play the kids rather than continuing to lose with veterans. In 1984 the Mets finally broke through, winning 90 games after having won fewer than 70 for seven consecutive seasons.  The biggest improvement on the club was the pitching, which featured three rookies: Ron Darling (acquired from Texas), Sid Fernandez (acquired from the Dodgers), and 19-year-old phenom Dwight Gooden.

In the following off-season Cashen landed third baseman Howard Johnson and catcher Gary Carter in separate deals, and suddenly the Mets had one of the game’s best offenses to go with their great pitching.  New York won 98 games and took the Cardinals down to the season’s final days before falling three games short.  While Carter, Hernandez and Strawberry had good years, it was Gooden who had a season for the ages — 24-4, 1.53.

After the 1985 season Cashen made another great trade, dealing unneeded players to the Red Sox for pitcher Bob Ojeda.  The resultant Mets made a mockery out of the league in 1986, winning 108 games and waltzing to the division title, then survived two brutal playoff series to win their first title since 1969.  It was an extremely well-balanced team, with the best offense and pitching in the league, and only one player accumulating 5 WAR (Hernandez).  The club was filled with young stars and seemed poised to win several more championships.

This did not happen, even with Cashen making two more great trades that winter, landing Kevin McReynolds and David Cone.  Gooden entered drug rehab in April 1987, and it was Gooden’s problems more than any other that foretold the Mets’ decline.  They remained a competitive team for several years, and won 100 games and the NL East in 1988, but were never again able to put it together as they had in 1986.  Gooden and Strawberry, their two bright young stars, had good years remaining, but both had long battles with drugs and crime, likely costing Hall of Fame careers for both.  Hernandez and Carter declined for more conventional reasons — aging, and the team appeared rudderless by 1990.

Cashen let Davey Johnson go during another second place finish in 1990, and resigned himself after the 1991 squad finished fifth.  He remained an advisor to the Mets for several years.

Cashen’s front office record is extraordinary.  He directed a great organization in Baltimore, and after taking over as GM, he made some great trades to keep the Orioles in contention and won two division titles in four years.  In New York he inherited a mess, and used the Oriole model to build the organization — scouting, player development, and excellent young pitching.  Although it ended sooner than he would have liked, the seven-year run (1984-1990) averaged 94 wins per season, finishing first or second every year, and captured a title.  This was the most successful period ever for the club, on and off the field — coupled with a down period for the Yankees, the Mets were by far the most popular team in New York for several years, giving hope that they could be so once again with another great team.