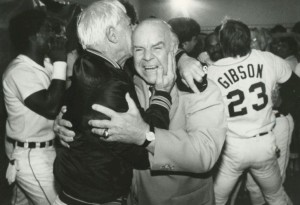 Jim Campbell was decidedly old school.  He believed in building teams through scouting and development.  He displayed loyalty to his players and staff, who he expected to work hard and show appreciation for their opportunity. To those he respected he would be generous and loyal.  On those principles his Detroit Tigers won the 1968 World Series. He distained marketing and give-away days; to Campbell, winning should be enough.  And when the environment shifted, he remained a throwback.  He never reconciled himself to the players union or free agency.  Nevertheless, he was one of the few general managers who built a World Series champion in the 1980s without changing his approach.

Campbell joined the Tigers organization in 1949 as business manager of their club in Thomasville, Georgia, the bottom rung of the minor leagues. As with many future GMs coming up at the time, the minor leagues proved a fertile training ground. While Campbell was moving up—he was named farm director in 1956 and director of minor league personnel and scouting in 1961—the Tigers cycled through five general managers in seven years.

When John Fetzer took control of the Tigers’ ownership group 1961 he began searching for the long-term general manager he felt the club needed. Baseball GMs in those days often had tremendous power, presiding over the entire organization—the stadium ushers, ticket sellers, the public relations staff. Fetzer later said that he thought Campbell was “ten years away” from taking on such a job, but the more he searched, the more he was intrigued by the 38-year-old executive. Fetzer also recognized that Campbell’s scouting and development organization had been doing its job well during the years of management turmoil.

From 1957 to 1962 the Tigers’ scouts signed a number of amateur free agents who would become the core of their squad. Of the top sixteen players on the eventual 1968 world championship team (the nine position players with at least 100 games, six pitchers with at least 70 innings pitched, and pinch-hitter extraordinaire Gates Brown), eleven were originally signed during this six-year time frame: infielders Dick McAuliffe, Ray Oyler, and Don Wert; outfielders Jim Northrup, Gates Brown, Willie Horton, and Mickey Stanley; catcher Bill Freehan; and pitchers Mickey Lolich, Pat Dobson, and John Hiller.

After the 1962 season, Fetzer put Campbell in charge. At Fetzer’s behest, one of Campbell’s first tasks was to find non-segregated spring training accommodations.  Campbell successfully negotiated with politicians and business leaders in Lakeland, Florida to create a more tolerant environment for the players. Once in charge Campbell began to integrate the system’s young players onto the roster of what was already a pretty good team and resisted the urge to trade prospects for veteran stopgap solutions. He also continued to find players, landing Denny McLain in the now-extinct first year player draft. As the prospects were introduced to the majors, the team jelled under manager Charlie Dressen, but in 1966 the organization suffered tragedy when both Dressen and his successor Bob Swift left the team for health reasons and died before the end of the year.

To skipper the team for 1967 Campbell hired Yankees scout Mayo Smith, who, on the surface, did not seem a particularly inspired choice. The Tigers remained in the pennant race until the final day of the 1967 season, ultimately finishing a game behind the surprising Red Sox. Campbell essentially stood pat over the 1967–1968 winter, believing that with some of his injured stars for a full season the team could win. He was right, and in 1968 the Tigers won the World Series for the first time since 1945.  After years of contention, Campbell’s homegrown ball club had finally come together.

Though the core of the 1968 team was already middle-aged, the Tigers continued to contend over the next several years.  After the 1970 season Campbell traded the increasingly troubled McLain for Joe Coleman, Eddie Brinkman and Aurelio Rodriguez, among others, bolstering his squad for another run.  Under new manager Billy Martin, the team won 91 games in 1971 and a division title the next year, mainly with the same, now-aging core.  In fact, the Tigers of this era had the most stable roster in baseball history. Nine Tigers—Gates Brown, Norm Cash, Bill Freehan, Willie Horton, Al Kaline, Mickey Lolich, Dick McAuliffe, Jim Northrup, and Mickey Stanley—were together for the entire decade of 1964 to 1973, easily a record.

As these players aged, Campbell proved unable to replace them, principally because the Tigers were much less adept in the early years of the draft than they had been in the previous era of amateur free agents.  Because a team was limited by its draft position, its scouts could no longer sign as many top amateurs as the ownership would afford or they could hustle. Campbell overrated his drafted prospects and by 1975 the team bottomed out at 102 losses.  Martin had been fired two years earlier when Campbell could no longer tolerate his off-field baggage.

Despite the team’s struggles Campbell disdained the opportunities presented by the introduction of free agency in 1976, signing no significant free agent for many years.  Fortunately, the team’s scouting department hit another hot streak, drafting Lance Parrish in 1974; Lou Whitaker in 1975; Alan Trammell, Dan Petry, and Jack Morris in 1976; Kirk Gibson in 1978; and Howard Johnson in 1979.  As these players matured together, Campbell had another great young nucleus to build around.  And once again he filled in masterfully: he snapped up manager Sparky Anderson and traded for Chet Lemon, Aurelio Lopez, and Willie Hernandez, among others.  After a second place finish at 90-72 in 1983, the club was sold to Domino’s Pizza magnate Tom Monaghan, and Campbell became the Tigers president and CEO, relinquishing the general manager position to Bill Lajoie.

Lajoie added a couple of stopgap free agents (Milt Wilcox and Darrell Evans) and the team Campbell had built broke through with a historic season in 1984, winning 104 games and cruising to the World Series championship, one of the few built in the era without the considerable influence of free agent signings.  Campbell presided over one more division championship in 1987, but was let go in 1992 as the team was again being sold.

In 21 years as the Tigers GM Campbell built two world championship teams and finished over .500 16 times.  Though the second half of his tenure offered a new way to source talent, Campbell remained a throwback and built a champion without materially relying on free agents. 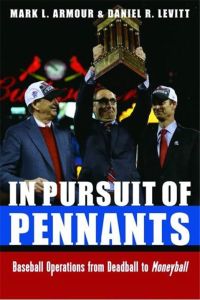